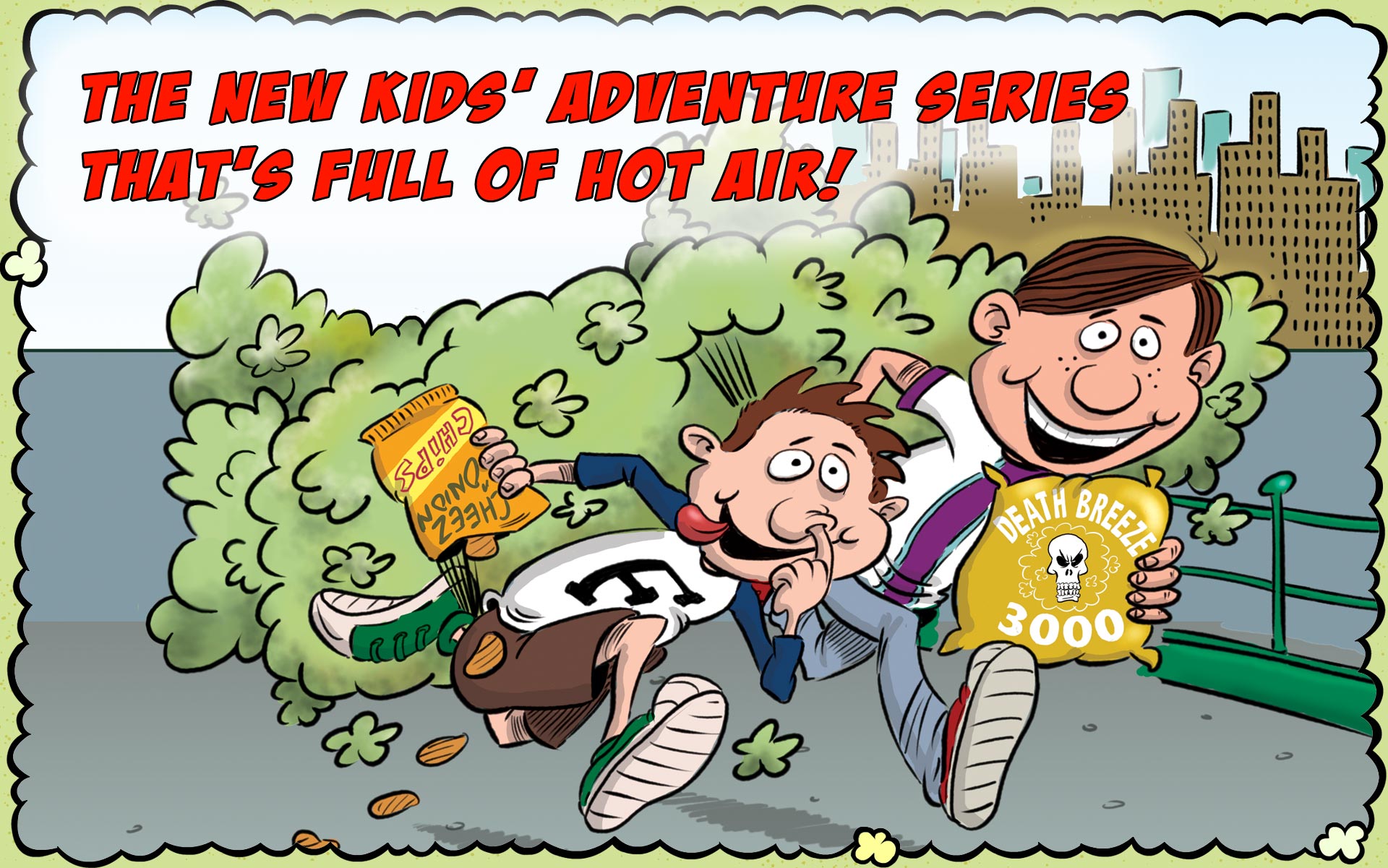 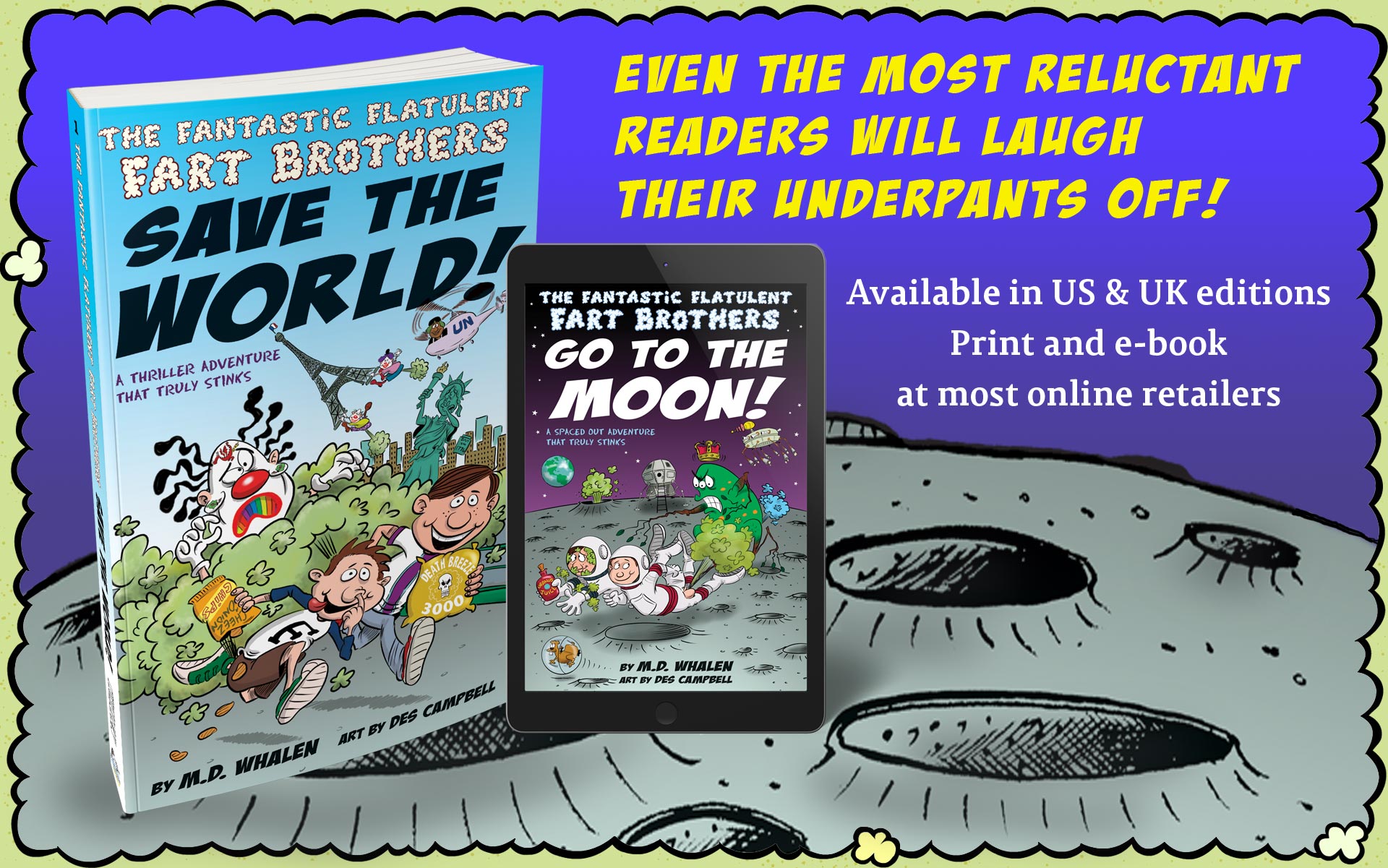 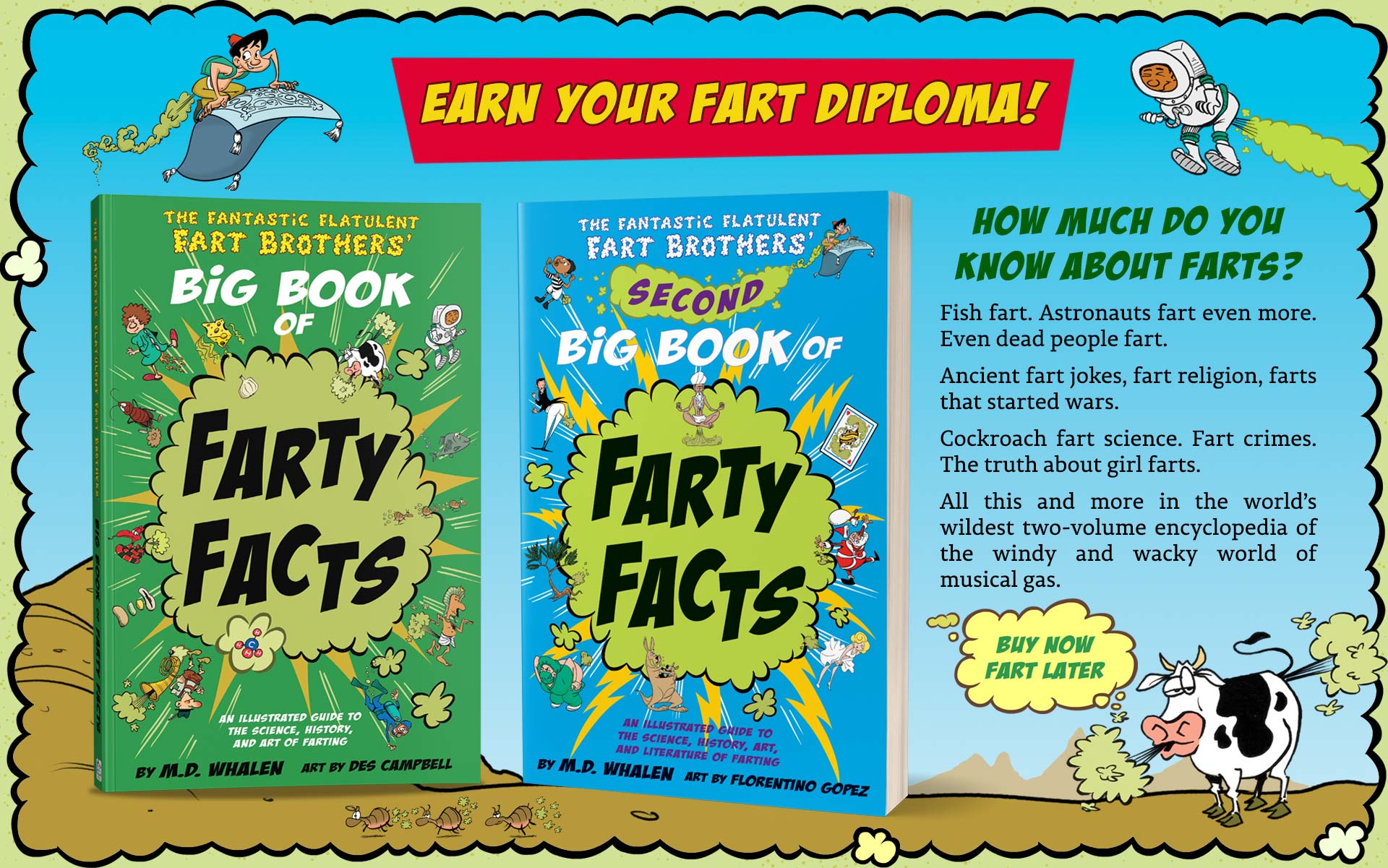 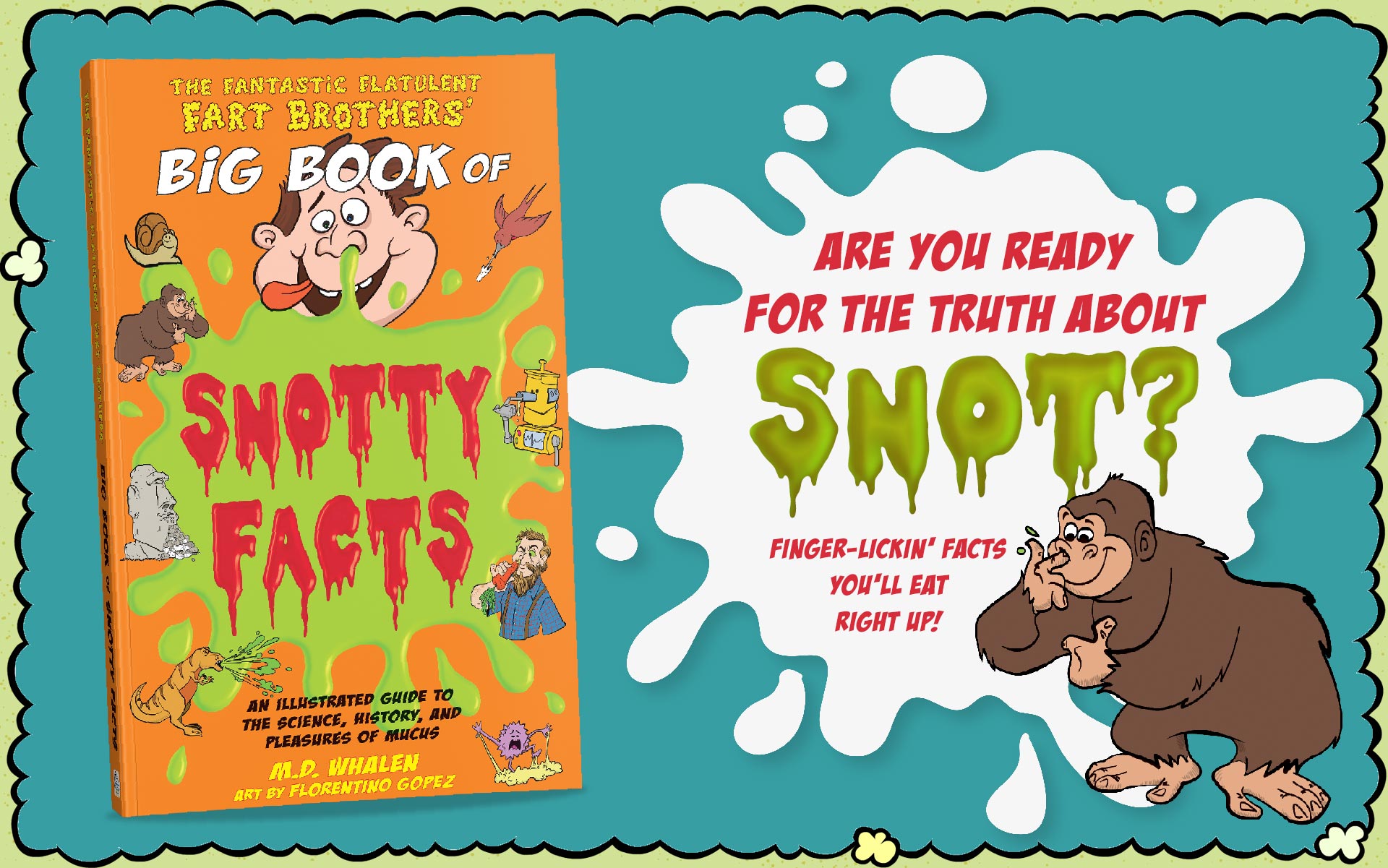 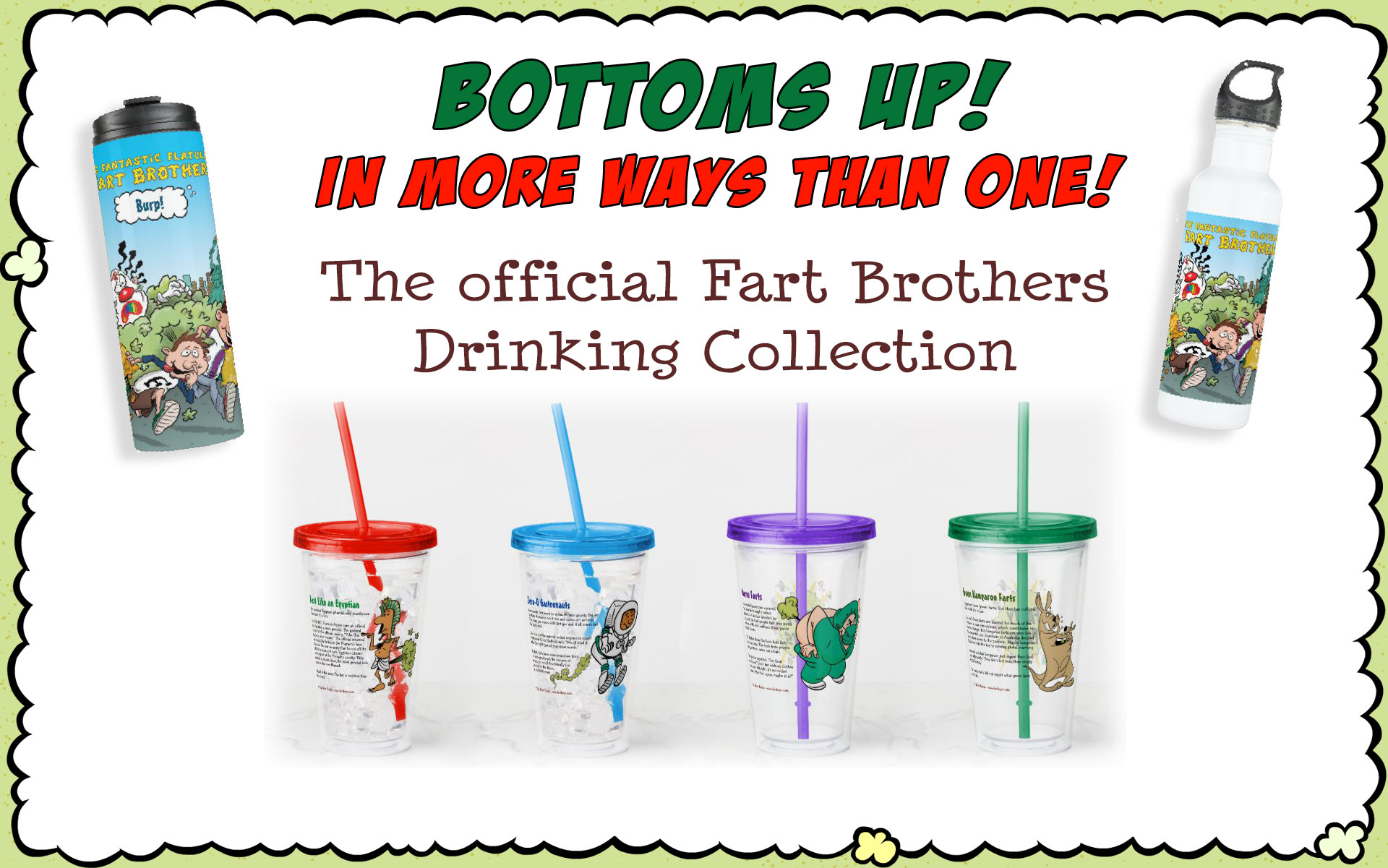 Read, read, it makes you smart!
The more you read, the more you... 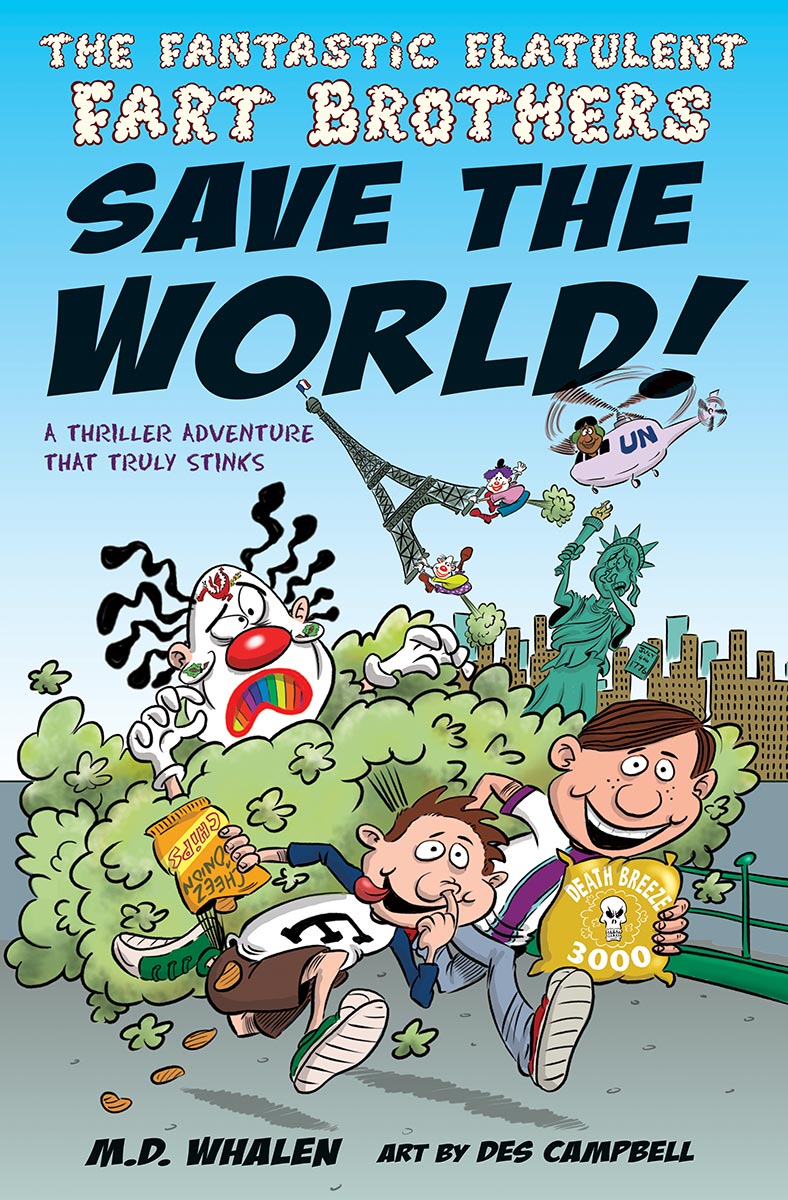 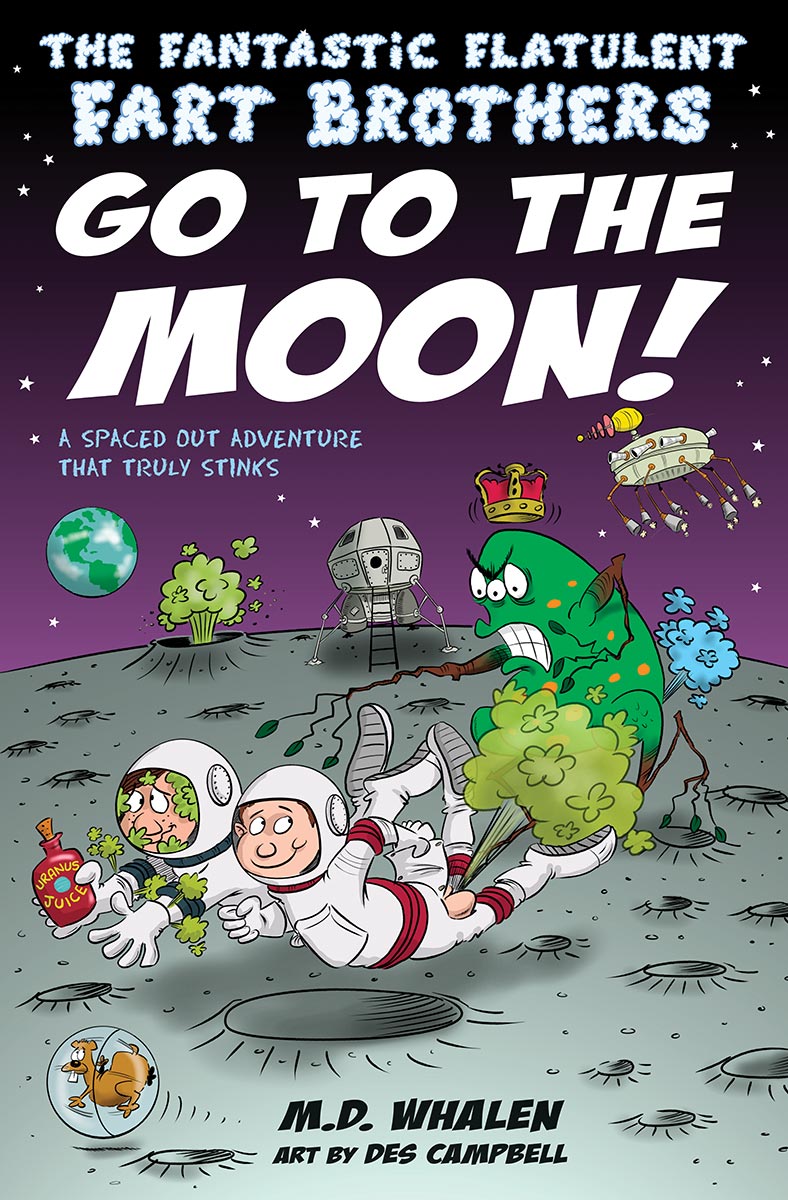 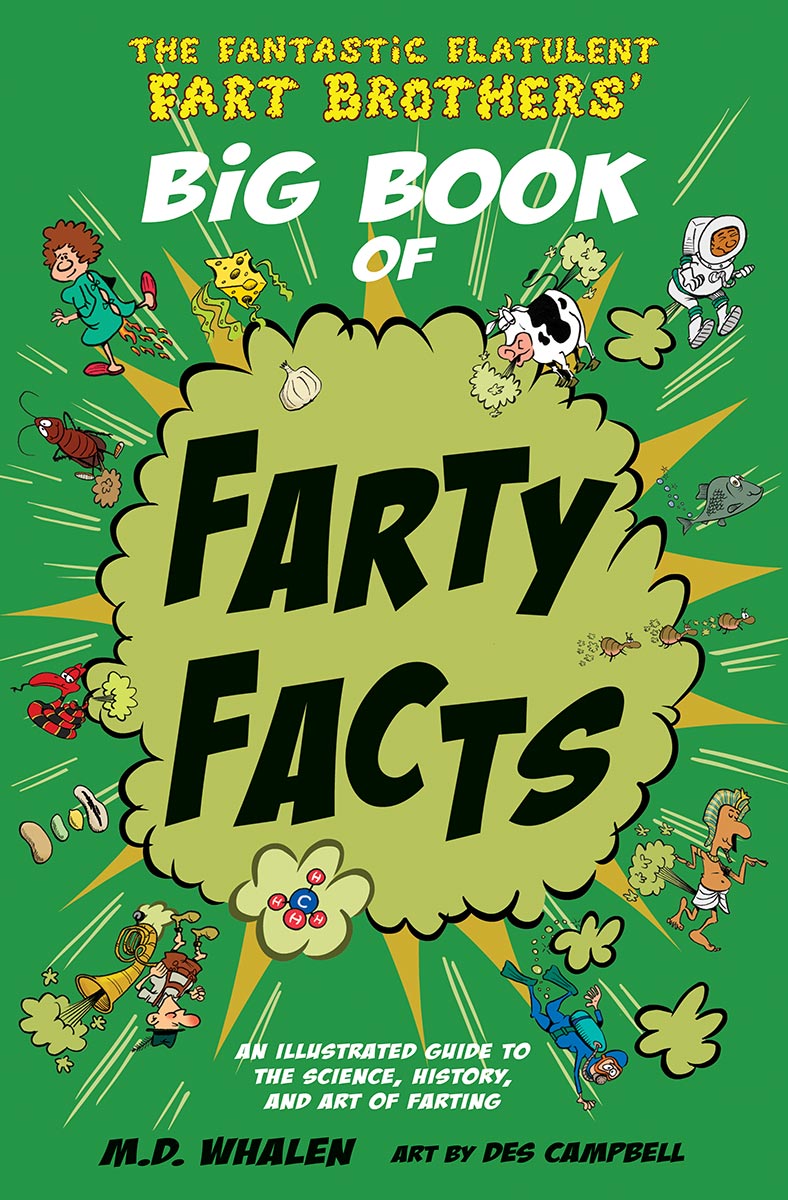 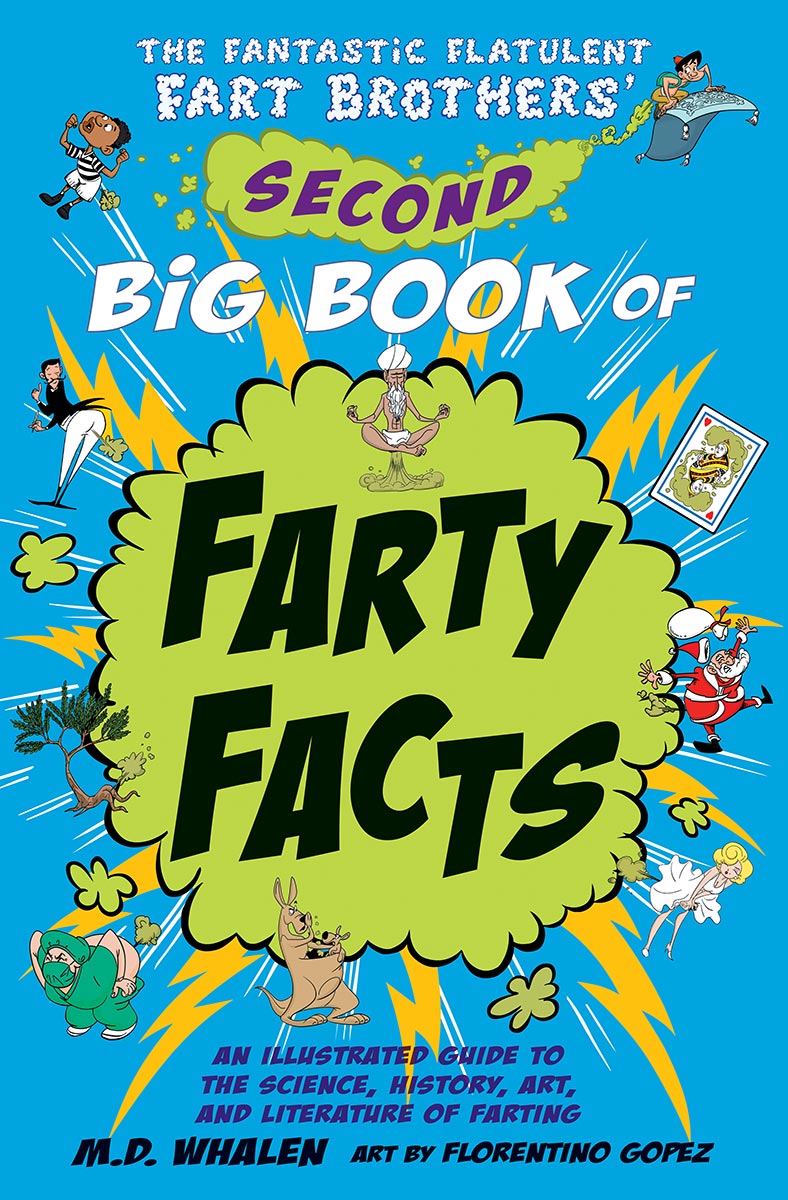 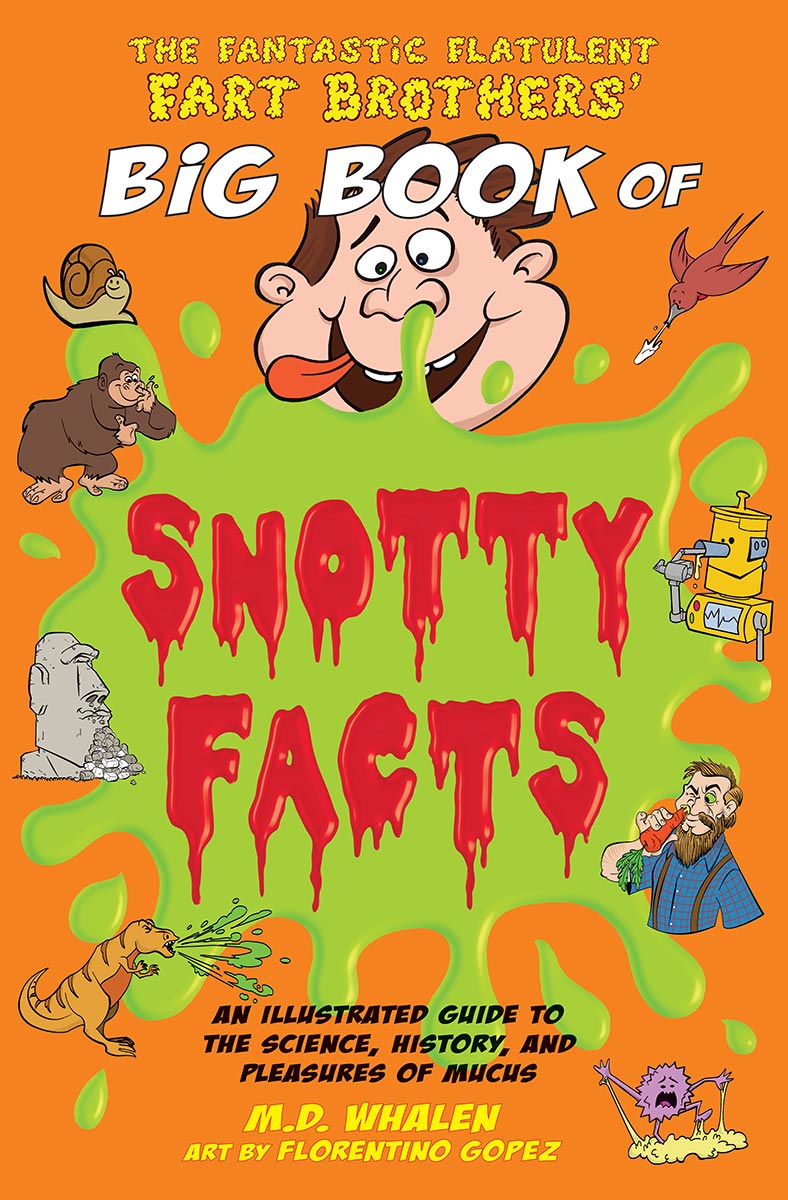 Would you trust these guys to save the world?

While Willy and Peter are shopping for their sister's birthday present, they're captured by mad clowns, with a putrid plan to destroy civilization with Weapons of Mass Flatulation.

From flying camels to stormy seas, can the brothers out-fart the evil clowns? Can they save humanity from ex-stink-tion? And can they still get home in time for their sister's birthday party?

With hilarious pictures and easy-to-read action-packed text, even the most reluctant readers will howl out both ends. Ages 9-12.

READ THE FIRST CHAPTER FOR FREE!

Would you trust these guys with a spaceship?

Willy and Peter need to get as far as possible from their sister's dumb kindergarten pageant. But they never expected to blast their butts to the Moon!

There they discover aliens about to transform the Moon into one big, gross stink bomb. Do they have enough gas in their guts to repel an invasion from Uranus? And how did a hamster get in and chew up their space ship's cables?

With hilarious pictures and easy-to-read out-of-this-world text, even the most reluctant readers will howl out both ends. Ages 9-12.

READ THE FIRST CHAPTER FOR FREE!

How much do you know about farts?

Farts can destroy the planet, but smelling farts can be good for your health.

Ancient fart jokes, fart religion, farts that started wars. The science of cockroach farts. Plus a fart dictionary. All this and more in this hilarious-but-true encyclopedia of the windy and wacky world of musical gas.

Fully illustrated with easy-to-read text, even the most reluctant readers will howl out both ends. Ages 9-adult.

READ SOME FARTY FACTS FOR FREE!

Did you know that plants fart? Kids go to jail for farting? That there's a movie award for Best Fart? Do you secretly think farts are not only funny, but fascinating?

Increase your Fart IQ and impress your friends and teachers with this gas-powered, illustrated fact-filled follow-up to the best-selling original Big Book of Farty Facts.

READ SOME FARTY FACTS FOR FREE! 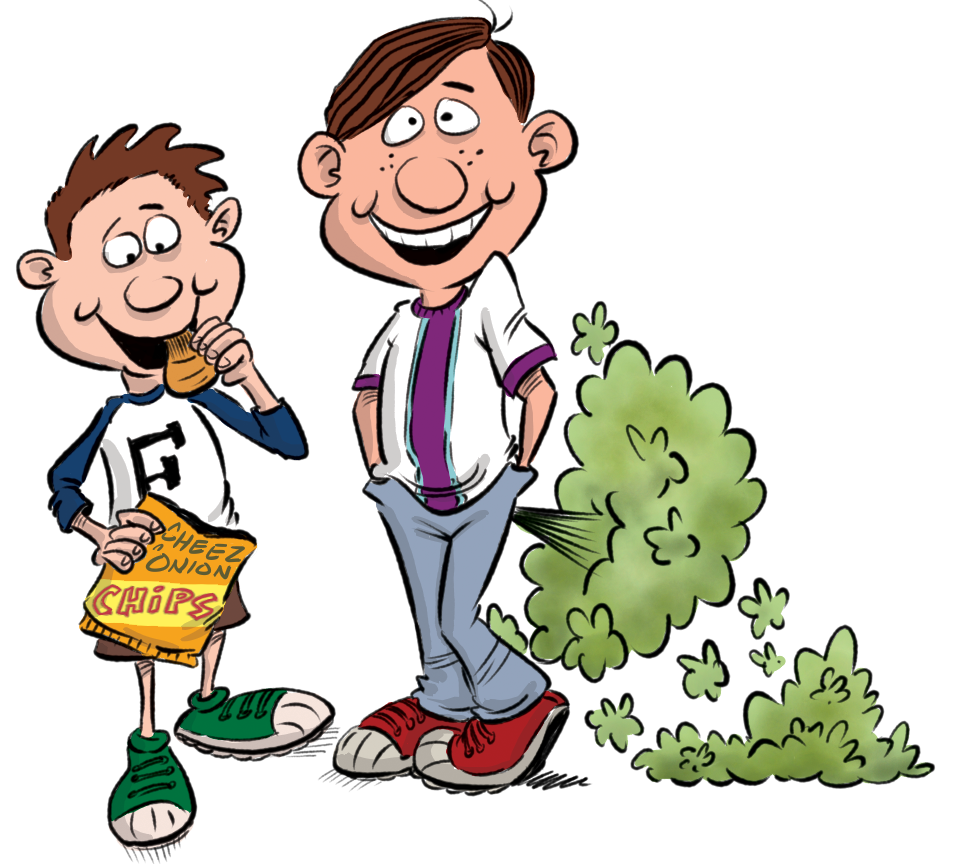 Willy and Peter live just down your street. They love beans, boogers, and farting up school buses full of Girl Scouts.

Sure, they get into deep trouble. But they always end up saving the universe through the magic of intestinal gas.

Here's who gets them in trouble: little sister Skyler. 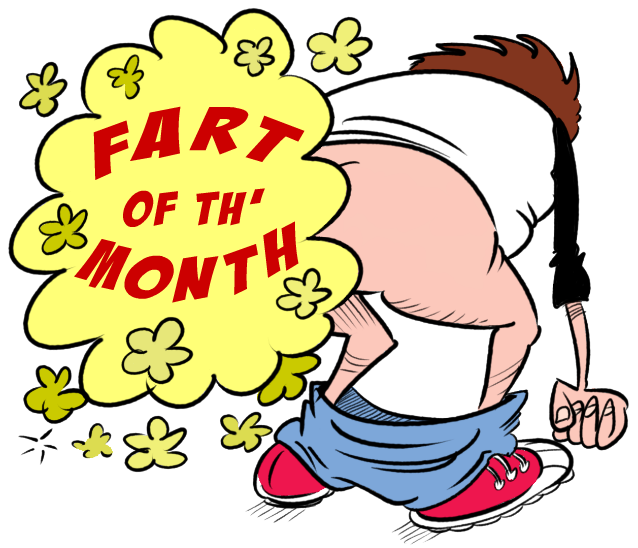 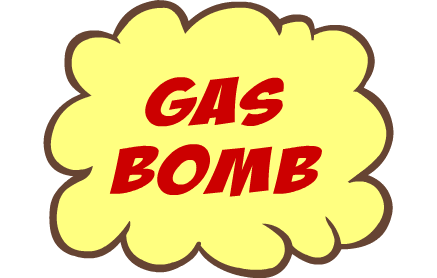 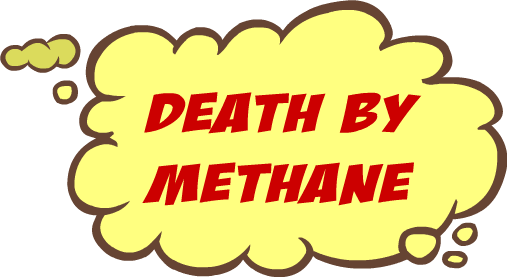 FARTY FACT
OF THE DAY

Do girls fart less than boys? Yes and no.

A study by fartologist Dr. Michael Levitt has proven that, when men and women eat the exact same food, women release more concentrated gas than men. In other words, girls' farts are thicker than boys' farts, including the stinky part.

It would take only nine farts from every person on earth to produce the same power as a hydrogen bomb.

Let’s all hope that there’s never a World War Phew.

Hard to believe, but by far the fartiest animal on Earth is...

They may be tiny, but for their body size, they fart way more than us. And there are lots of them. Together, all termites on Earth release 77 billion gallons (290 billion liters) of fart gas every single day. By contrast, all humans together release a mere 15 billion gallons. We're out-farted five-to-one!

Maggot farts are good for you!

Researchers in Singapore discovered that maggot flatulence kills the bacteria which can infect open wounds.

That means, next time you get a cut, forget bandages or antiseptic cream. Just spray on some maggot farts!

Farts forced an airplane to make an emergency landing.

A Singapore Airlines cargo plane flying from Australia to Malaysia was halfway through the flight when the smoke alarms went off.

After making an emergency landing, they discovered the “smoke” was actually accumulated farts from the two thousand sheep on board.

OLDEST JOKE IN THE WORLD

The world’s oldest joke ever recorded was a fart joke.

It was discovered on tablets written 4000 years ago in the ancient land of Sumeria, and went like this:

“Something which has never occurred since time immemorial; a young woman did not fart in her husband’s lap.”

One ancient religion worshipped the holy power of farts.

Manichaeism believed that “farts release divine light from the body.” In other words, farting is kind of like prayer, but from the other end.

It must have been a laugh riot sitting in church.

Imagine living in a place where farting is the most polite thing you can do.

The Yanomami tribe, who inhabit rain forests in Brazil and Venezuela, say hello by farting at each other.

The question is: how do they answer the phone?

Do farts act like natural rocket engines in space?

When asked whether space explorers actually tried blasting themselves through the air by farting, astronaut Chris Hadfield replied:

“We all tried it. Not the right type of propulsive nozzle.”

We want to see the videos! 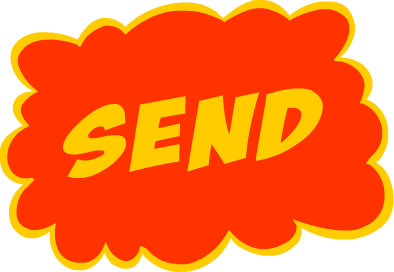